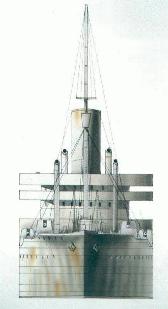 In both world wars the Royal Navy was short of cruisers and attempted to make up the deficiency by attaching a few guns and White Ensigns to selected liners. The resulting ships were classified as armed merchant cruisers and used mainly as escorts. They were vulnerable ships, being high-sided, unarmoured, and not highly compartmented. In the Second World War they were all disposed of well before the war ended.

One of them, the former P. & O. liner Rawalpindi, came to a gallant end when confronted by two German battleships, scoring a hit before going down with most of her crew. Another, the former Aberdeen & Commonwealth liner Jervis Bay, was destined to become the most celebrated of these unsatisfactory ships.

The Jervis Bay, built originally as a passenger ship to carry emigrants to Australia, was taken over by the Admiralty in August 1939. Seven 6-inch guns, dating from the turn of the century, were distributed around her decks. She was repainted grey and allocated a crew of 255 men (mainly reservists), and the White Ensign was hoisted. Her role was that of ocean escort for Atlantic convoys. In the First World War the Germans had frequently employed armed liners for raiding work, and they did the same in the Second World War. Against such ships the Jervis Bay had a good chance of success, but she was no match for armoured ships.

Officers of the HMS Jervis Bay